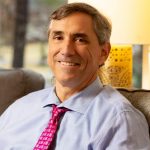 GEORGE SHAMBLIN
WRITER, TEACHER, AND PASTOR
In the summer of 1995, George Shamblin left a successful career in pharmaceutical sales, and a year-end bonus large enough to pay for three years of tuition, to enroll at Reformed Theological Seminary in Jackson, MS. Though he experienced more than his share of challenges and setbacks over the next 25 years, it’s a decision he’s never regretted.

Since 2012, Shamblin has served as a pastor with The Center For Executive Leadership in Birmingham, Alabama — where he teaches Bible Studies, disciples others at various stages of spiritual growth, and maintains an active role in leading overseas mission trips . Also an adjunct professor at Birmingham Theological Seminary, Shamblin published his first book, The Relay, in 2020.

An avid outdoorsman, as well as a Master Gardener, George and his wife of 27 years, Jill, have four children — Sydney, Bailey, Miller, and George Jr. 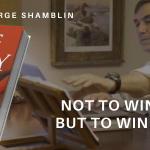